A blog about Victorian miniatures, some historical and some definately not! 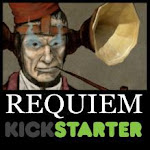 Managed to spend a few hours on Sunday painting. Here are some figures I painted some time ago but finished off yesterday with a very quick base job. 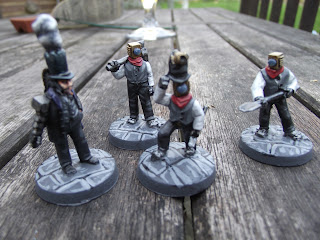 These are now available from Black Pyramid Gaming although I bought them Design 28 which was run by the John Harrison. I have all the packs they produced and although they are not the normal style we get nowdays I like them. This is Isambard Kingdom Brunel with three steam navvies, Brunel died in 1859 and I think this figure will be used to represent his son Henry Marc Brunel who carried on in his fathers footsteps.
Posted by Mors at 01:42 8 comments:

Labels: empire of the dead, London

I am currently reading The Yard by Alex Grecian, a novel about  Scotland Yard based just after the Jack the Ripper murders, the same time as the fantastic television series Rippers was set and as the Empire of the Dead fluff. Its a pretty good story and although Ive not yet finished I would highly recomend it. 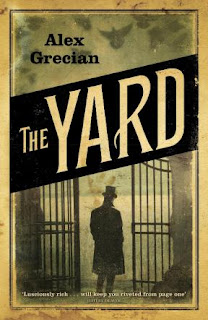 In light of a distinct absence of any miniature painting I thought I would post some of the books I own which I feel would be of interest to gamers into Victorian London. 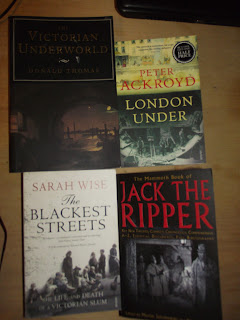 The Victorian Underworld by Donald Thomas covers the seedy side of Victorian life, its not one I have read yet but should provide plenty of ideas for characters in gaming. Peter Ackroyds London Under is a fairly short book giving a overview of the London below the surface, although not just on Victorian stuctures there is plenty the of interest with chapters on The Underground railway, Londons rivers and streams (there is 13 of them) , sewers  etc etc there is plenty of ideas for below ground boards.Sarah Wise The Blackest Streets I read a few years ago and for a detailed view of the the East End slums it is a very well written social history, if somewhat depressing by showing mans humanity to man. It tells the tale of the Nichol, a notorious slum near Bethnal Green.The Jack the Ripper biik is just one of many available, it seems to have a good covergae of the information available including many statements, it has about 6 experts give there opnion on who the Ripper was and it has a bibliography and a filmography. 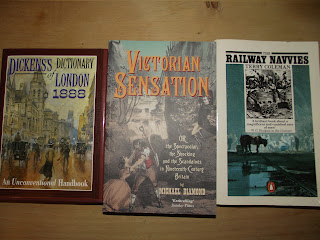 Dickins Dictionary of London 1888  is a very useful reprint. Written by Charles Dickens son in it is jampacked with info about almost anything you want to know. All the Gentlemens Clubs are listed (as well as the two Ladies clubs , one of which will be the basis for a EotD faction of mine), there is Omnibus information,the addresses of all the Embasies,detailed info on the make up of the Met Police Force etc, there are over 700 entries detailing leisure, banking, transport, commercial, church, and some observances on social behaviour.Excellent reference for EotD players who intend to game London.
I have not yet read Victorian Sensation by Michael Diamond, its sub title of Spectacular , Shocking and the Scandolous of 19c Britains gives a good idea , it has chapters  on Sex Royalty Murder  Religion amongst others, should be good for some scenarios or back storys.
I bought The Railway Navvies in a oxfam shop and found it very interesting. It details the story of the navvies and provides some ideas for gang scenarios, apparently they often fought down Nationalist and religous lines...times dont change. 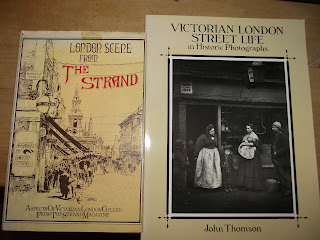 These last two provide some visual stimulation, they pretty much speak for themselves.
Posted by Mors at 15:58 2 comments:

Labels: books, empire of the dead

The long weekend did not quite go as planned! However I did manage to get some paint on some Victorian Bobbies I have. With the activity of EotD and IHMN there are options coming for Victorian London Buildings. Sarissa are producing a likely looking range called Gaslamp Alley, early pictures can be seen here http://www.sarissa-precision.co.uk/ , they appear to provide a option to go either with terraced buildings suitable for the East End which is I suspect what most people are after to do scenarios linked to Jack the Ripper etc , but they do have some upmarket propertys so a posher part of London can also be modelled.
4Ground http://www.4ground.co.uk/ are also producing a range which are linked into the IHMN release, they have posted a teaser of a police station on there facebook page , just what I need! 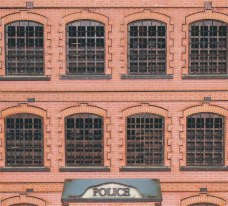 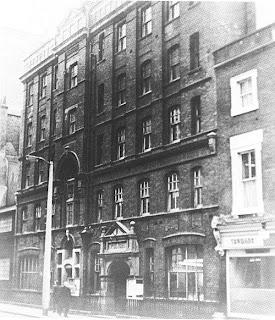 Jimbibblys Oshiro Model Terrain http://www.oshiromodelterrain.co.uk/victorianbuildings.html
also have some perfect buildings too.
Looks like for those of us who like to buy there terrain we can at last get a Victorian urban table set up without too much pain. It will be something I look forward to doing in the Summer...if we ever get one
Posted by Mors at 23:53 5 comments:

My first foray into a kickstarter , which seems to have come all the rage during my sabbatical away from the hobby, has ended. Westwind managed to get £92,848 pledged which I think they will consider a great success. Im not telling how much I pledged!
I was looking forward to Empire of the Dead when I heard it was going to be released , then of course it came out during my break so I did not buy into it, well I have now. I actually started doing some work on my existing figures last weekend in preparation for the rules pdf which I hope we will get shortly. Although the game only needs about 7-8 figures per side , most of the figures will be eminently suitable for all types of other adventures.
With the long bank holiday weekend coming up and my family away I am going to get some of my older figures finished off that I started many moons ago, and Im aiming to run a game on Monday using the introduction adventure on the website http://www.westwindproductions.co.uk/catalog/empire_landing.php 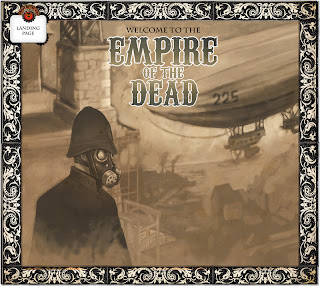 I got plenty of coppers with more on the horizon, I hope Westwind produces some like the artwork above with gas masks. 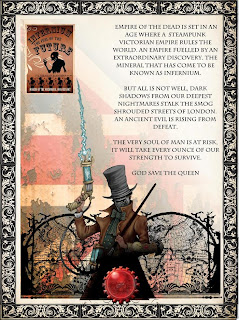 More posting at the weekend....

Labels: empire of the dead, News

I have changed my mind and decided to keep this blog purely Victorian. With the arrival of Empire of the Dead Kickstarter:
http://www.kickstarter.com/projects/832150598/empire-of-the-dead-requiem-0
and the imminent new rules from Osprey called In Her Majestys Name and accompaning miniatures from North Star
http://nstarmagazine.com/IN_HER_MAJESTYS_NAME.htm
there is just too much cool stuff coming out in the VSF world.
I realy need to start blogging again , sadly the real world keeps interupting.
Posted by Mors at 01:40 No comments:

Well, where did 2012 and most of 2011 go? Its been a long time since I blogged, the reason being I took a break from the hobby. I did not visit my normal websites, go to gaming shows, do any painting or read any books realating to history/wargaming. The reason was I got a interest in something completely different which can be seen below.However I am now back painting again but a different period.I was going to set up a diferent blog to cover my other miniature interests but have now decided to put all my posts on this one...for the time being. The Victorian stuff will continue but for the time being I am back in the Dark Ages, more posts with updates to follow, in the meantime here is my baby... 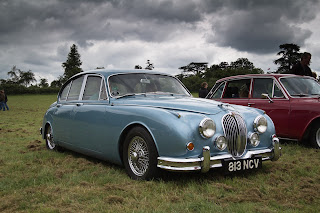 During my visit to Salute I acquired some scenery to create a cemetery , including the new plastic gravestones from Renedra, as well some from Westwind, Hasslefree(made by Armourcast) and a few others I forget at the moment but when painted I will post some pictures. So a new unforeseen project has started , although to be fair I have always wanted to have a cemetary and a church for my victorian London project. This project has come closer to likelyhood from some new products I saw at Salute....more later on this. I have spent my spare time at the weekend painting up some Renedra plastic camp site bits I bought at Salute and a Ziterdes cemetary chapel I ordered form a newish gaming shop in Surbiton, here is a link to them http://www.heroesandlegendsgames.com/ 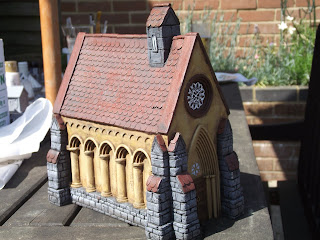 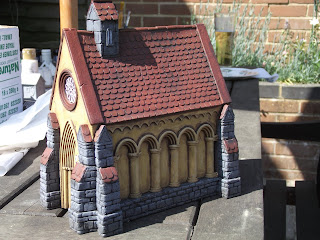 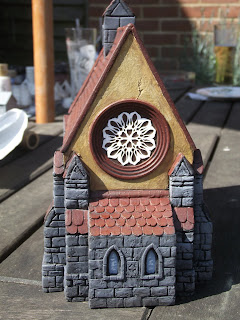 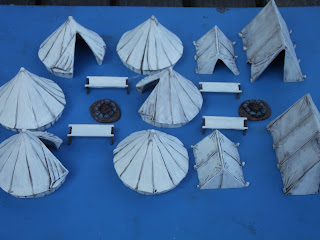